What To Do If You Overpromised During The Sales Process? 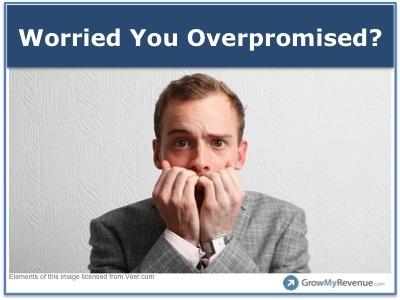 While speaking at a recent event in Atlanta one of the attendees raised a great question. He asked, “What if you realize that you have indeed overpromised on what you can deliver?”

The best advice when something goes wrong is to communicate early and honestly with your client. When you make a mistake, take ownership and communicate honestly. In fact, if handled properly, you might end up in a better place than you imagined.

Here are common scenarios where you may need to recover after overpromising to a client. The most important thing to remember is that the sooner you can reset expectations, the better.

Your Colleague Said “Yes” When they should have said “No”

You have a solution that requires two months to deliver. During a sales meeting your customer asks “If you can deliver us a solution in a month, we’ll sign a contract with you today.” Your colleague (who just might be your boss) says “Absolutely.” In fact, once you were able to deliver a solution within a month. But, you know it is likely to take two months for this client’s solution.

In this scenario, you might say to the client, “I want to ensure that we are all on the same page. I know we’ve delivered within a month in the past. Other projects have taken closer to two months. I’d hate for any delays to impact your organization. I’d like to know we all have the same expectation of two months, knowing we’ll do whatever we can to shorten the schedule.  Would that be OK?”

Unless you are delivering the ball for Times Square on New Year’s Eve, a short delay is often not a deal killer, as long as you manage expectations up front.  One of the 2014 Sales Trends I predicted ties to honesty, so you may as well start early.

What You Said Was Accurate Until Someone Else Messed Up

Perhaps you set the correct deadline and expectations. However, your solution depends on the work of others. Perhaps you depend on regulatory bodies, strategic partners, or suppliers. An attorney might be adversely impacted by dastardly acts of the opposing counsel. A home renovation company might be on track until the flooring supplier misses their delivery schedule.

In each of these situations, the most natural thing to do is throw the other party under the bus. I was at a restaurant recently where the food was delayed. The waiter said “The kitchen has no clue what they are doing. It’s not my fault.” Having heard that statement, I was not exactly inclined to dine there in the future. If you throw your own team under the bus with the hopes of making yourself not look foolish, it just doesn’t work.

In this scenario, you might say to the client, “We felt we had planned for potential delays, but I guess we did not allow enough time. We are doing everything in our power to get the issue resolved, and as soon as we know with certainty the revised schedule, we’ll communicate with you. If we uncover other alternatives, we’ll present any credible options to you for consideration.”

How To Prevent Overpromising

When you overpromise, you run the risk of putting your entire business relationship at risk. The worst outcome would be ultimately not meeting the client’s expectation of time or deliverables. The 2nd worst outcome would be that the client realizes it is unlikely (or impossible) for you to deliver. Just to be clear, neither outcome is a good one.  It helps if you proactively work to prevent overpromising in the sales process.

In my book Upside-Down Selling, I discuss a principle called “pre-selling objections.” Pre-selling objections is when you are up-front with the client about issues that almost always arise towards the end of the sales process. Doing this allows you to bring up and address the issues on your terms. This method can help you get around situations where you get caught off guard and accidentally (or intentionally) overpromise.

When you do make a mistake, remember to communicate early and honestly.  Take ownership and communicate honestly with your client. Your candid conversation will go a long way toward making the client feel comfortable. When you make a mistake and masterfully resolve the issue, you often can end up in a better position than if you had executed without anything bad happening. This is not to suggest that you should intentionally mess up. Rather, when something goes wrong, don’t run away. In fact, if handled properly, you might end up in a better place than you imagined.

When have you been the recipient of an exceptional recovery? When did someone overpromise, and then make it worse by not taking ownership of the solution?

This site uses Akismet to reduce spam. Learn how your comment data is processed.